The curatorial project by session 19, entitled How not make an exhibition, was an interdisciplinary program that took place the 29 and 30 May 2010 at Le Magasin - Centre National d’Art Contemporain in Grenoble. Taking the forms of round tables, a workshop, dlectures, performances, publications and installations, it gathered artists and artistic collectives from Spain, United States, France and Latvia, of various generations, and from different fields. 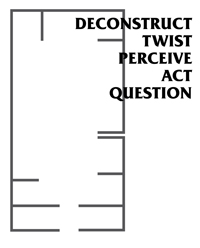 Taking as a starting point the context, a school, within which it has been developed, How not make an exhibition questioned the construction of aquired and assimilated knowledges. The "tactics of fiction", a notion that articulated the program, offer alternatives to the established systems of learning and question their coercitive dimension. Borrowed to the French theorician Michel de Certeau, the word tactic refers to a way of infiltrating the rifts of dominant systems to create insertitial spaces. The notion of fiction not only refers to the creation of an imaginary world, but offers a narrative framework allowing an intelligible construction of reality.

downloadable here : How not to make an exhibition